It was in 2012 when Agrocorp Landbase was formed with a unique concept and a never-say-die attitude with a dream in heart and plan in mind to provide a rich and luxurious feel to the majority out there. With immense hard work and impeccable consistency and persistence, the results were out and our two young torchbearers were passed with flying colours.

In a short span of just 6 years, Agrocorp Landbase has already developed and delivered 6 dream projects and 7th one is ready to be the next milestone of the company, making our total delivered area of more than 10 million sq.ft of residential, commercial and agricultural land. This success story was recognised by StartUp Magazine (Silicon India) and Agrocorp was selected as one of the Best Startups of 2018. 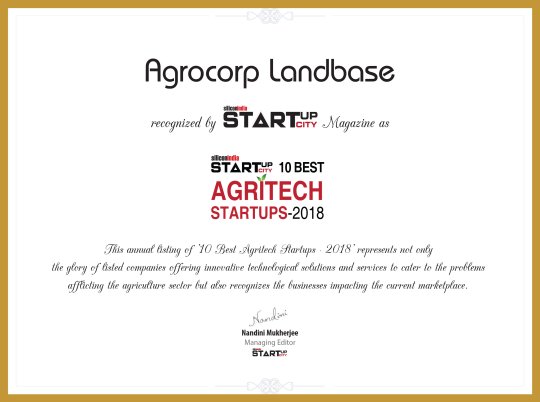 Affordable and Developed Plots in Bangalore: An Exclusive Concept Recognised By Silicon India

If you had any doubt in mind before, now would be the best time to dissolve it! We are happy to announce our recognition as one of the Best StartUps in 2018 by the esteemed magazine Silicon India. We have put our heart and soul into our projects and knowing that our audience loves it as much as we do, make us the happiest team ever. We have won the hearts of our 500+ customers and brought a smile on their faces with our tremendous efforts on our flawless projects.